Kansas has always been known for its excellent schools. One reason is that  school funding is provided for in the Kansas Constitution which says : “the legislature shall make suitable provision for finance of the educational interests of the state.” Kansas schools are a bargain for the taxpayer as Kansas schools rank eighth in the nation in quality while the seven states above Kansas all spend more per pupil than Kansas does. Much of the success is due to the quality and commitment of teachers and educators in Kansas. We must see that they are paid adequately for their services and, just as important, that their services are recognized and appreciated.

Equitable: Kansas’ laws require that school funding be  both equitable and adequate. In 1973, the legislature passed the School District Equalization Act (SDEA)to ensure that students in districts with a low tax base would have as much chance at a quality education as those from richer districts. It also provided property tax relief for districts with a small tax base. The state picks up more of the cost of those schools according to a school funding formula designed to ensure equity. In a challenge to the SDEA in 1992, the court ruled “the duty owed by the Legislature to each child is to furnish him or her with an educational opportunity equal to that owed every other child.”

Inexplicably, in 2015 the Legislature decided to abandon the school funding formula and use a block grant system to fund schools.  That created a Constitutional crisis which could have resulted in the schools being closed. That was resolved in a special session in June where the Legislature came up with $39 million to address the equity issue to the court’s satisfaction.

Adequate: The court was also not satisfied with the adequacy of the funding. In 2018,  lawmakers added $548 million be phased into the state’s $4 billion education budget over the next four years. The court ruled that that was not adequate as it did not allow for inflation. To address that issue, the 2019 legislature added another $90 million per year over the next three years. After that, school funding will  be adjusted annually for inflation by using the CPI. The court accepted this as adequate, and the Gannon school funding lawsuit is for now settled. The court maintained jurisdiction in the case to be sure the Legislature followed through on the funding in future budgets.

Higher education has also been hit by budget cuts. State funding for higher education in Kansas has decreased by 8.6 percent, or nearly $100 million, since 2007-08. In  2016, $16 million was cut from higher education to close a budget gap for that fiscal year. In 2017, a 4% across-the-board budget cut further reduced the higher education budget by another $30.7 million. The 4% percent cut was unwise as it was based,  not just on the state’s support, but on the  schools’ total operating budgets. This cut even more from  the state’s research schools, i.e., KSU, KU, the University of Kansas Medical Center, and the KSU Veterinarian School. This year,  the 2019 Legislature approved an increase of $34.4 million for higher education. That is certainly a step in the right direction but it still does not make up entirely for previous budget cuts.

Kansas’s future: Cuts to colleges and research facilities are never wise. Where will the new ideas come from to improve Kansas’s competitiveness and economy? The Legislature even sold off the Biosciences Research Facility which was to make Kansas a leader in bioscience and genetics research. If we do not fund our colleges properly, where will we get our next generation of scientists, engineers, teachers, business leaders, and entrepreneurs? And, will our next generation of college students b prepared if we do not fund K-12 education properly?

Excellence: Equitable and adequate school funding are not really enough. The Legislature  must make it a priority  that education funding is not only adequate, but at a level to ensure excellence.

2 thoughts on “We Must Properly Fund Our Schools”

Request mail ballots or register to vote without sending birth certificates or other documents at: https://ksvotes.org/

A Big Thank You!

I really appreciate all the help and support I have received.

This site and my Facebook page @JCMoore for Kansas are to support those who want to keep Kansas a great state. Thanks again for your support.

Recognition is always great! This is from the Kansas Contractors. 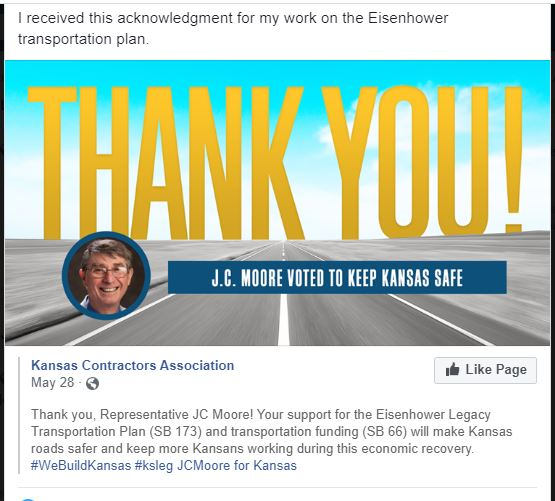 JC, with granddaughters Kenda and Rachel at the Park city July 4th parade.

With grand-daughters at the Park City Fourth of July Parade.

Speaking at the Park City Chamber of Commerce

Speaking at the Pachyderm Club

Paid for by Janice Johnson, Treasurer.

Education is a goal of this site.